Take two on the terraces 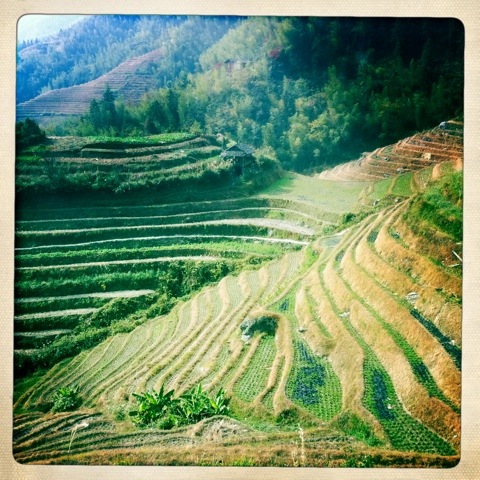 After the week rolled by, I had fully recovered from the stolen wallet, so I decided to strap on the traveling boots and try to make it to the rice terraces once again. This time I superglued my money and essentials to the inside of my armpits where no one could get them.
Getting to my destination – Ping An- was an ordeal, but as usual, the people showed me the way when I floundered. I don’t know if they thought I was pathetic or just mildly retarded, but they were friendly and helpful as ever.
I was too cheap to take the tourist buses that go there (plus I have to watch my money now that I have no way of getting more) so I took the local buses. At one point I was in the middle of nowhere, sitting on a dirt pile on the side of the road, waiting for a connecting bus while a sweet man kept signaling for me to wait as bus after bus went by. Finally a rickety thing that looked like it might be held together with nails and duct tape came rolling by and he motioned for me to flag it down. It ws standing room only.
Kids had just gotten off school – it was 5:30- and the bus was full of them and elder tribal ladies in their ethnic attire, weathered faces and bizarre head gear that looks like it’s made out of hair. After a long and winding road that would even be breathtaking to the Beatles, we made it to the gates of Ping An where we began walking. There are no cars or bicycles allowed because the houses in the village are all on the side of the mountains with stone steps leading everywhere, so walking is the only way to get around. Once inside the village, it’s a maze of surprisingly-easy-to-get-lost-on stone paths.
Many of the women here are from the Huanglo Yao tribe. They only cut their hair once or twice in life, when they are 18 and later, if needed. They then save this 3 foot long pony tail and later, as their hair grows out all the way to the floor, they wrap their hair around their ‘childhood’ ponytail. (I’m sending another video of it – it’s amazing) The river of hair is then curled in a bun worn at the top of their forehead. Here is what they look like when they “let their hair down”:

As soon as I settled in my hotel, the village’s labyrinth was yelling for me to come out and play. I didn’t think to bring a coat or a flashlight, both of which I needed as soon as the sun went down. The waiter at the outdoor restaurant-with-a-view where I ate saw that I was cold and brought me a tablecloth to wrap myself up in. I covered my shoulders and head with it, to get that “just released from a Russian gulag” look, and enjoyed my meal. On the way home, I got completely lost as I tried to light my way with my iPhone. Yet another sweet Chinese boy showed me the way – taking me all the way to my door after seeing I was unable to follow difficult directions like “go straight”.
The next morning, I laid in bed enjoying my view:

Finally, I went for a walk around the rice terraces. These paths are better marked, so I only got lost once (but it was a good lost) The harvest happened about a month ago, so now the fields are covered in autumn colors. They’re mesmerizing in any season, as you can tell: